Resolution Announces Five New Members of its Board of Directors

The Resolution Project is proud to announce the appointment of five new members of its Board of Directors as of January 1st, 2021. All five members have joined Resolution’s Board from their previous positions on the Advisory Board. You can read more about Jessica Matthews, Nneka Eza, Michael D’Alto, Reeta Gupta, and Michael Dougherty below! 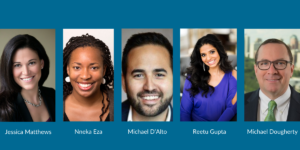 Jessica Matthews is the Global Head of Sustainable Investing at J.P. Morgan Private Bank and brings over a decade of sustainable and impact investing expertise. In this role, she leads the development and execution of the Private Bank’s sustainable investing offering and focuses on expanding the platform of sustainable investing managers, developing thought leadership,  and working with clients to integrate their social goals with their long-term investment objectives. Prior to joining J.P. Morgan, Jessica was Cambridge Associates’ Global Head of  Mission Related Investing (MRI), where she oversaw and coordinated the activities of all MRI resources across the firm and advised clients on their MRI programs. Jessica previously worked with government clients in the financial services sector at Booz Allen Hamilton, in the  Investment Office at the American Red Cross, and in the Global Consultant Relations Group at  BlackRock. Jessica began her career with Cambridge Associates as a consulting analyst.  Jessica graduated from the University of Virginia with a BA in Government and a Minor in  Economics.

Michael D’Alto is currently the COO of Client Service and Marketing at Bridgewater, responsible for operations of the sales and marketing teams. He joined Bridgewater in 2008  and was previously COO of the Research Technology group. Prior to that, he led Executive Recruiting. Before joining Bridgewater, Michael was a Research Principal at Egon Zehnder  International, a global human capital consultancy and executive search firm. He was a member of the founding team of The Resolution Project. He graduated from Harvard College in 2002.

Michael Dougherty is the Global Chief Operating Officer of Deloitte, leading the operations of the Deloitte network. He provides the leadership, management, and vision for Deloitte’s operational controls, technology, procedures, and people to deliver financial strength and position the business for growth. Michael is a member of the Global Executive Committee.  He chairs the Global Operating Committee, which unites Deloitte leadership around key initiatives to drive the company’s global strategy and ensure optimal operating results. Previously he served as the CFO of Deloitte Global. Michael believes in leadership transparency, experiential development, and the power of data in decision making. Outside  Deloitte, he serves as an Advisory Board Member of Chicago Children’s Advocacy Center.

Nneka Eza is a Partner at Dalberg, where she serves as Nigeria Director and co-leads Dalberg’s Global Agriculture and Food Security Practice. She focuses on sectors including agriculture, education and employment, financial services, creative industries, urban resilience, and inclusive growth across Africa, as well as in Asia and Latin America. Nneka is on the board of the Impact Investors Foundation of Nigeria (which is establishing Nigeria’s  National Advisory Board for Impact Investing), the Investment Committee of VestedWorld, an impact-focused early-stage fund, and the West Africa Steering Committee of the Aspen  Network of Development Entrepreneurs (ANDE). Prior to joining Dalberg, she was a  consultant at McKinsey & Company. Nneka holds an AB in economics cum laude from  Harvard University.

Reetu Gupta is the President and CEO of the Gupta Group/Easton’s Group of Hotels, Canada’s largest private hotel firm, with over 20 properties in Canada with six under development. Reetu is also the Co-Founder and Chief Strategy Officer of Rogue Insight Capital. Reetu was awarded Canada’s Top 40 Under 40 Award in 2017 and was a recipient of the Women’s Executive Network 100 Most Powerful Women in Canada in 2019. Reetu continues to be an inspiration in the hospitality industry and for women everywhere.